Why Brazil’s permanent austerity policy is harming its economic future

This article is part of a series by openDemocracy and the Bretton Woods Project on the crisis of multilateralism. The views expressed are those of the author’s only, and are not necessarily representative of either organisation.

In a recent speech, the IMF managing director Christine Lagarde called for new measures to secure growth and stability in an increasingly fragile global economy. These measures included use of fiscal policies such as progressive taxation and stronger social safety nets, as well as greater access to education, healthcare and infrastructure. Lagarde also highlighted the importance of reducing inequality for economic growth.

But around the world many governments are still moving in the opposite direction. And despite the recent speech by the IMF’s managing director, in many cases this is happening with the support of the IMF and World Bank. One such example is Brazil.

In 2015, the Brazilian government introduced austerity measures in an attempt to resolve a severe economic crisis. In December 2016, a reform called ‘Constitutional Amendment 95’ came into effect with the support of IMF and World Bank. Known widely as the ‘expenditure ceiling’, the amendment mandates a zero real growth rule for federal primary expenditures for the next 20 years. In practice this means that federal spending must be maintained at 2016 levels, with adjustments only allowed to be made for inflation.

Over time, this expenditure rule will lead to a reduction in public expenditure relative to GDP and relative to Brazil’s population. As shown in Figure 1, simulations have predicted that federal primary expenditures will reduce from 19% in 2017 to 12% of GDP in 2036.

Figure 1: Simulations of primary expenditures of the Federal Government, in % of GDP, 2017-2036 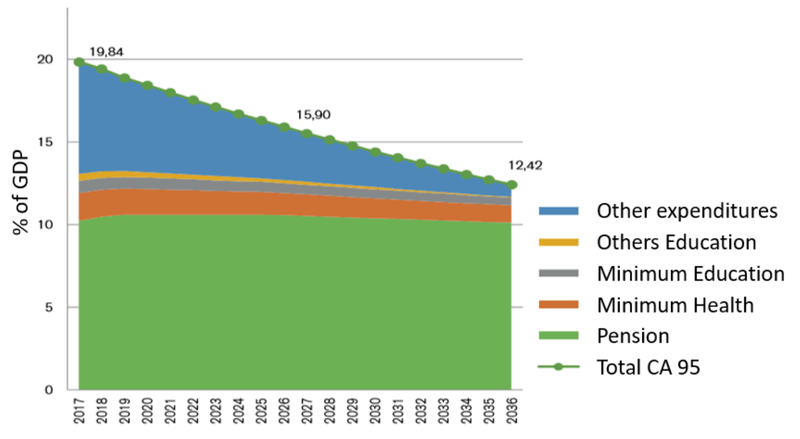 Three years on, it is clear that these austerity policies are not succeeding. In 2018, GDP was 5% lower than in 2014, and unemployment has increased from 4.8% in 2014 to 12.3% in 2018. Despite steep budget cuts, the fiscal deficit and the public debt have increased due to the decline of economic activity and tax receipts. As a result, data indicates that the austerity measures introduced by the government have been counterproductive.

Aside from the effect on the overall size of public expenditure, there is also a composition problem (or “flattening effect”) that will squeeze non-compulsory expenditures. Social pensions spending, which has important distributive effects, will be maintained around 10% of GDP for demographics reasons, even when considering forthcoming pension reforms. In this context, there is no room for maintaining current health and education spending as a proportion of GDP, which means that they will need to decrease under the new rule alongside others areas of expenditure.

Figure 2: Stages of fiscal policy and the Gini index in Brazil 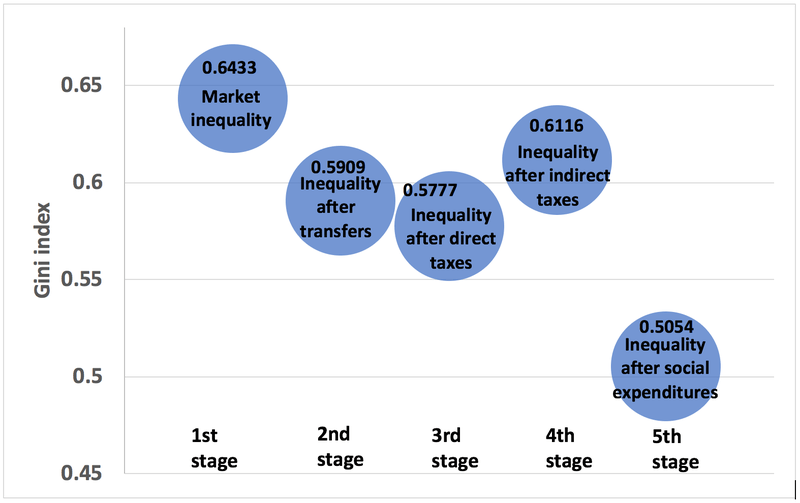 The chart shows that although the tax system does not reduce inequality (due to the level of indirect taxes which burden the poorest), transfers and social spending on health and education reduce inequality significantly.

The fiscal consolidation measures in Brazil will therefore significantly compromise the distributive aspects of fiscal policy. Instead of upgrading tax systems with progressive tax measures to enlarge fiscal space and maintain social policies, Brazil has chosen the path of reducing the distributive power of fiscal policy and increasing inequalities. And this has been done with the support of the IMF and World Bank.

The effects of these austerity measures have been severe. For example:

The permanent austerity measures in Brazil have not gone unopposed. Many Brazilian civil society organisations (CSO) and social movements are now fighting back. Some groups have taken Constitutional Amendment 95 to the UN Human Rights Council and the Human Rights Inter-American Commission.

A number of UN Special Rapporteurs have issued a communication to the Brazilian government concerning the negative impacts of austerity measures on human rights, particularly those related to Constitutional Amendment 95. To advance this agenda, many CSOs and other experts are developing a ‘Principles and Guidelines on fiscal policy and human rights in the Americas’ which it is hoped will be used in domestic courts and before human rights bodies within the Inter-American System as a legal mechanism and as a powerful advocacy tool for a broad range of stakeholders.

Among these stakeholders are the IMF and World Bank. In the 2018 Spring Meetings, a session took place titled ‘A lost decade for human rights? Assessing austerity and its alternatives 10 years on from the financial crisis’. Meetings such as these are a tentative sign that things may be changing.

We hope that the studies and speeches by the IMF and World Bank highlighting the importance of fiscal policy in reducing inequalities will inform their policy advice in Brazil. If this happened, the “expenditure ceiling” would be revoked immediately, progressive taxation would be introduced and social spending and public investment would be increased.

These are the type of policy measures that are desperately needed to reduce the excessive inequality that exists in Brazil today.

Why Brazil’s permanent austerity policy is harming its economic future